Stable "Het Bovenveen"
Joining the herd-book of dwarf goats is associated with a stable name. This is then called the family-name of the goats. Because of the fact that peat has been dug in front of our house, the buildings are now a few meters above the peat land, that’s why we called our stable “Het Bovenveen”, which means “Above the peat”. At 5.5 acres around our house we keep about 45 sheep and 10 dwarf goats. Our sheep are free of maedi-visna and the rams we use have the ARR/ARR scrapie-status. For our goats we are certified Brucellose, CAE and CL free.

Remember the old days: 1989 De Bulten, Wezep
History
In 1980 everything started with holding some Dutch polder sheep, but soon they were replaced by better onces. In 1982 we joined the NTS (Dutch Texel breeding organisation) with farm number 4598, and in 1983 the first lambs were registered in the flock book.
In 1998 we started seriously with breeding, after we had some ewes to mate to ram 4030-1980. This worked so well that in 1999 we bought this ram, which had the highest predicate a ram can get “preferente ram”. 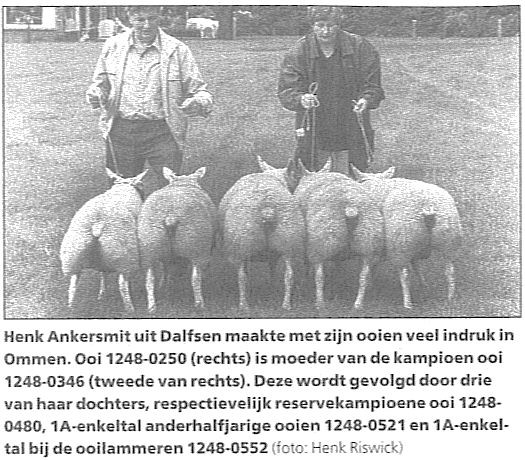 Besides these 3 lines, we have several ewes coming from above breeders.